Photo courtesy of The Big Easy

It’s nearly mid-March, which means that if you’re a college student, you’re probably getting ready to spend a week with 10 other hoodlums, holed up in some beachside shanty, soaking up moderate quantities of sun and lethal quantities of booze, in honor of that great American pastime known as spring break. Well, guess what: Even if your undergraduate years are over, you needn’t dip to Tijuana to partake in the sort of lewd, depraved behavior pictured above. There are plenty of bars where you can experience the thrills of spring break–from the alcohol poisoning to the scantily clad girls–right here on the Isle of Manhattan. Here they are. 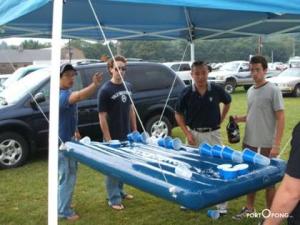 The only thing better than absurd drinking paraphernalia is absurd drinking-game paraphernalia, and nothing says “I’m a douchebag” quite like carrying around an inflatable beer pong table. Which is exactly why the $45 Portopong will make the perfect holiday gift for that special frat boy* in your life. As with most alcohol-related products–like the booze belt, another real gem–the Portopong is entirely practical to haul around town, you know, just in case you find yourself back in college. Then again, if you carry both the Portopong and an air mattress around with you at all times, you can play beer pong whenever you want without ever having to worry about where you’re going to pass out afterwards. Order now before the manufacturer jacks up the price due to overwhelming demand. Just kidding.

*Contrary to the scene depicted in the photo, this is obviously not a toy for nerds, but rather for the quarterbacks who torment them. It’s just that that photo was taken at a Yale tailgating party. Go figure.