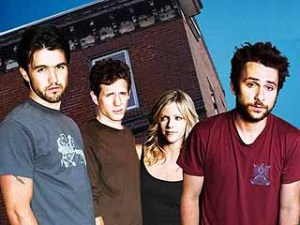 It's Always Funny in Philadelphia

The little TV show that could, It’s Always Sunny in Philadelphia returns to FX this summer for a third season. The show–which was picked up in 2005 after a pilot that reportedly cost only $85 to make was submitted to FX under the title It’s Always Sunny on TV–circulates around four friends (two of whom, Dennis and Dee, also happen to be twins) who run Paddy’s, an Irish pub in the City of Brotherly Love. Midget-turned-actor Danny DeVito joined the cast last year in the role of Frank, the twins’ father–or so we were led to believe before it was revealed at the end of last season than he is actually their friend Charlie’s biological father. A bunch of lazy, depraved, egomaniacal liars, these kids are fast becoming our personal heroes, and if you don’t get FX, don’t worry; episodes of It’s Always Sunny are available for download on iTunes.