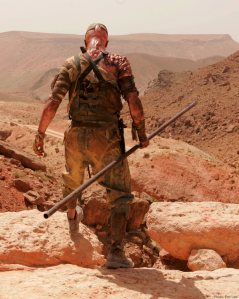 From A Nightmare on Elm Street to the Scream trilogy, everyone knows that when Wes Craven makes a picture, it’s going to be scary. This March, the master of all things nightmarish follows up the first installment of The Hills Have Eyes (2006) with this sequel, which he co-produced and co-wrote with his son, Jonathan. In Hills 2, a group of young, inexperienced National Guardsmen travel to a desert research outpost to deliver supplies to some government scientists, only to discover that the facility has been eerily abandoned. What begins as a seemingly routine rescue mission turns into a terrifying game of cat and mouse, as the troops are hunted by the cannibalistic mutants that occupy the hills. The premise may seem less appealing than that of the first film, in which we saw the Carter family picked off, one by one, but if you’re looking to be frightened you won’t be disappointed. The Hills Have Eyes 2 drops on March 23.
WWW.FOXATOMIC.COM (ORIGINALLY PUBLISHED IN YRB MAGAZINE COPYRIGHT © 2007)