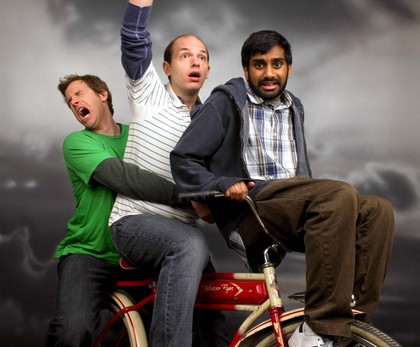 Ordinarily, the chances of me going out on a Monday night are nil, especially in this brick-ass cold. But with my television withdrawal giving me an increasingly nasty case of the shakes, I took the opportunity to check out last night’s sneak preview of the new season of Human Giant–the best thing to happen to MTV‘s comedy programming (or rather, MTV period) since The State— hosted by the Human Giants themselves.

As any proper night should, this one began with drinks. Various members of the press (editors and writers from Maxim, the NY Post, the Village Voice, ASCAP, Giant and other publications) assembled beforehand at West Chelsea haunt Half King, along with the show’s stars, Rob Huebel, Paul Scheer and Aziz Ansari, before making the troupe to the UCB Theater.

It may have been after 11pm on a weeknight, but you wouldn’t have known it from the size of the crowd, which was spilling out into the aisles. Granted, the show was free, but it was clear that these people would probably have paid to see it. And for good reason–the raw and uncut clips screened last night were so outrageous, explicit and unbelievably hilarious, it’s difficult to imagine that the Standards Department at MTV would even entertain the possibility of airing them, even after heavy editing. Case in point: A sketch called “Car Accident,” which tells the tale of Bruce Penis (Huebel), a deceased gay porn star whose ghost haunts his supposed killer (Ansari) by violating him physically in order to open his, uh, eyes to the truth.

Afterwards, those of us who aren’t a bunch of lightweights and whiners–winos, perhaps, but not whiners–returned to Half King for more drinks with Rob, Paul and Aziz and friends that included several Saturday Night Live writers and performer Bill Hader.

I had the chance to spend some time chatting with Rob (who has frequently appeared on Best Week Ever and played the memorable Dr. Mark character in several episodes of Curb Your Enthusiasm), and he told me that filming for season two is going well, but admits that it can be quite a lot of work writing and developing consistently funny material that can carry through several hours of sketches (a full season of Human Giant).

If the material that aired on the first season of the show–which got the green light for season two after MTV execs let the guys take over control of the airwaves for 24-straight hours of programming, broadcast live from the network’s Times Square studios–and what we saw last night is any indication, then their hard work is well worth it. Nothing is off-limits (including, but not limited to, 9/11, which they famously parodied last season in a number of episodic sketches entitled “Lil’ 9/11“).

Though the beer wasn’t free (it never is, sadly), getting to see the show was certainly worth every bit of pain I experienced this morning, when my alarm clock began taunting me to rise at the ungodly hour of 9:30am. But more importantly, it’s reassuring to know that in March ’08, Human Giant will be back on the air, giving people like me–who would sooner slit our wrists than watch 30 minutes (let alone a 12-hour programming block) of shows about Heidi Montag, her deadbeat boyfriend Spencer Pratt, and the trials and tribulations of their beef with Lauren Conrad–a reason to watch MTV.