It’s a bold move and a bit of a gamble.

AMC announced this week that is has already ordered a second season of its forthcoming Breaking Bad prequel, Better Call Saul, well in advance of its 2015 series premiere. It’s a strong vote of confidence for the show, which stars the terrific Bob Odenkirk as Saul Goodman, the shystiest lawyer in New Mexico.

While networks are famous for yanking new shows off the air without giving them any opportunity to win over audiences, rarely do we see a new series picked up for a second season long before the debut of its first episode. The operative word being rarely; it’s not completely unheard of. But does such a move always correspond to the eventual success of a series?

END_OF_DOCUMENT_TOKEN_TO_BE_REPLACED

This is my mom in 1967, when there was no internet or HBO and everything was boring.

Although I typically write about fun things like celebrities and booze–or, as my mom might say, “things you don’t need to go to Brown for”–sometimes I have occasion to cover more serious subjects. Case in point: My new article about the history of abortion in New York State for On The Issues Magazine. For the piece, I interviewed my mother, Emily Jane Goodman, who was one of the lawyers on the original legal team that sought to challenge New York’s anti-abortion laws in 1969, before the passage of Roe v. Wade at the federal level. Sounds fun, right? Read it at On the Issues.

Last week, the blogs were aflutter with the news that Katy Perry’s Evangelical mother is trying to sell a book about her daughter’s sinful lifestyle, and it got us thinking about other parents who have displayed questionable judgment when it comes to their famous offspring. Read on for a roundup of Hollywood’s most notoriously unfit parents, from the Lohans to Joe Jackson.

Dina and Michael Lohan
With role models like these, it’s no wonder Lindsay “Lindsay” Lohan turned to drugs and alcohol just to stay afloat. Michael is the only Lohan who has a longer rap sheet than Lindsay, with charges ranging from insider trading to driving under the influence to attempted assault. And the only thing he does more frequently than talk to the press about Lindsay is booze. Meanwhile, Dina is desperate to be a pseudo-celebrity in her own right, and conceived that god-awful reality show ‘Living Lohan’ as a way to capitalize on her other potential cash cow, daughter Ali. She even invited a crew from ‘Entertainment Tonight’ to film the troubled Lindsay while she was in drug rehab. Parents of the year these two losers aren’t. END_OF_DOCUMENT_TOKEN_TO_BE_REPLACED

Last week’s ‘Comedy Central Roast of Donald Trump‘ reminded us of that whole bizarre, widely publicized beef between The Donald and Rosie O’Donnell, and it got us reminiscing about all the other high-profile celebrity feuds that have captivated our attention, sometimes for years on end. Here are five of our favorites—from Tom Cruise vs. Brooke Shields to Charlie Sheen vs. The Trolls.

Tom Cruise vs. Brooke Shields*
You know what is totally insane? Scientology. Fact: Scientologists believe that an alien god named Xenu brought billions of his people to Earth 75 million years ago, stacked them around volcanoes and then annihilated them with hydrogen bombs, aided by psychiatrists. And the most famous proponent of the religion that espouses this nonsense is, of course, Tom Cruise. So when he launched a public attack in 2005 against then-new mother Brooke Shields for treating her severe postpartum depression with anti-depressants—claiming that she didn’t understand the “history of psychiatry”—it would have been laughable if it wasn’t so insulting. The ensuing media frenzy sparked one of the biggest celebrity feuds of all time, with both sides engaging in a war that lasted for months, until Cruise eventually gave in and apologized to Shields. He did not, however, retract his statements about the dangers of antidepressants, which he continues to insist are harmful to the body—which is ironic, considering that he’s obviously been dipping into a secret stash of crazy pills for years.

*Note: This version of the Tom Cruise vs. Brooke Shields entry is different from the one that appeared on PopEater, which had to be toned down for fear of incurring the wrath of Cruise and his legal team. END_OF_DOCUMENT_TOKEN_TO_BE_REPLACED

The month of March is upon us, which means the booze-soaked collegiate tradition known as spring break is about to commence. But while America’s future leaders are getting their stomachs pumped in Cancun, the rich and famous prefer to vacation in more luxurious, refined destinations — from the world’s most exotic beaches to its most glistening ski slopes. When it comes to your own spring break, which of those groups would you rather belong to? We thought so. Relax, renew and rejuvenate like the stars at these top destinations, which are commonly frequented by your favorite celebrities … plus people like Lindsay Lohan. And if, like us, you can’t afford an elaborate spring break this year, at least you’ll have a better idea of what you’re missing when you cry yourself to sleep at night. END_OF_DOCUMENT_TOKEN_TO_BE_REPLACED 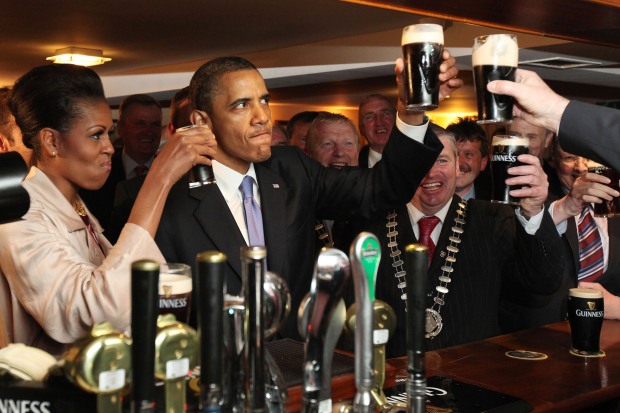 Super Tuesday is finally upon us, and while a gaggle of legitimate news outlets will be focused on boring us to death with talk of “precincts,” “delegates” and “exit polls,” we at Citysearch are bringing you the kind of hard-hitting, no-nonsense reporting that really matters. Specifically, we’re investigating a question that is of the utmost importance when it comes to selecting a new leader of the free world: “What would the presidential candidates drink, and where would they drink it?”

So, if you’re wondering how Obama’s plan to get the hell outta Dodge (where by “Dodge” I mean “Baghdad”) compares to McCain’s plan to keep us there for another 100 years, I couldn’t tell you. And if you’re unsure of how Clinton’s plan to offer universal health care differs from Romney’s plan to withhold it, I just don’t know. But what I do know is that by the time the polls close on Tuesday night, all of the candidates, winners and losers alike, will be fiending for a liquid fix.

So here’s our take on what and where each of them would drink–if the cameras (and evangelists) weren’t watching.  END_OF_DOCUMENT_TOKEN_TO_BE_REPLACED

In the age of the gossip blog, if you still subscribe to the belief that there’s no such thing as bad publicity, then chances are you’re not a publicist.

“I’m a polarizing figure,” says Perez Hilton, the self-anointed “Queen of Media” and the creator of the celebrity gossip blog PerezHilton.com. “Some people love me and some people hate me. Some people wanna tell me everything, some people are afraid to even make small talk around me. It depends who you are and how I rub you.”

Every day, close to four million unique visitors flock to Hilton’s site (formerly PageSixSixSix.com) for the inside scoop on the latest Hollywood scandal, juiciest truth-based rumor and even the occasional news byte.  END_OF_DOCUMENT_TOKEN_TO_BE_REPLACED

In a recording acquired by celebrity gossip site TMZ.com, actor Alec Baldwin leaves a message for his 11-year-old daughter Ireland (with ex-wife, actress Kim Basinger), in which he becomes enraged that she has failed to answer what was apparently a prearranged phone call.

“I’m leaving this message with you to tell you that you have insulted me for the last time. You don’t have the brains or the decency as a human being … I don’t give a damn that you’re 12-years-old or 11-years-old, or a child, or that your mother is a thoughtless pain in the ass who doesn’t care about what you do,” says Baldwin, adding that he intends to fly out to L.A. later in the week “to straighten your ass out.”

In a statement released to Extra, a spokesperson for Baldwin didn’t deny the authenticity of the recording but accused Basinger of leaking the tape to the media in violation of a court order. Don’t blame Alec; it’s not his fault that he was provoked to the point of calling Ireland “a rude, thoughtless, little pig.” What else was he supposed to do? After all, he’s Alec Baldwin, and she’s just some snot-nosed, 11- (or 12-) year-old little brat who thinks she can just traipse around the playground, screening her famous father’s calls and being ungrateful.

Way to show your kid who’s boss, Alec. I bet right now you wish you didn’t have the most recognizable voice in Hollywood.

LISTEN TO THE FULL RECORDING: ALEC BALDWIN, FATHER OF THE YEAR

"I may heart Huckabees, but I hate you."

In a video clip that was recently made public, director David O. Russell decides he’s had just about enough lip from actress Lily Tomlin on the set of the 2004 film I Heart Huckabees. He seems to think she is incompetent and unappreciative of all his directorial help. But perhaps David is the one who needs help – help remembering to yell “cut” before commencing with a screaming rampage that involves the use of words that rhyme with ‘bundt’.

Coincidence? I think not.